The Cost of Restricting Input Choices

The concept of minimum effective scale (MES) is often hard for students to grasp.  Firms will use the optimal combination and amount of different inputs such that they minimize their average total cost.  As an example, Starbucks almost always has two coffee machines and two registers (not counting the drive-through). They do this because, for them, two coffee machines and two cash registers are the optimal plant size. In general, if a geographic area has demand exceeding what can be handled by a single location, they simply build a second location.   This size minimizes their overall average cost so they have no incentive to make a different plant size that is less efficient.

The basic concept of minimum effective size can be demonstrated with a simple graph: 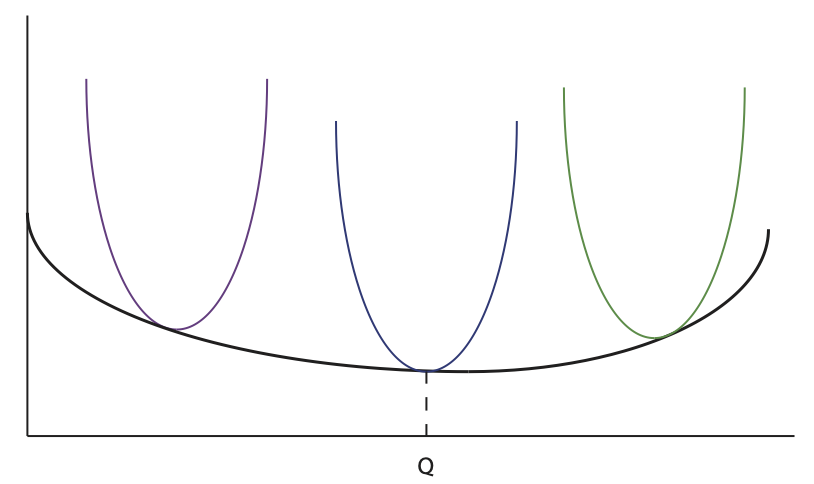 The solid line is the long-run average cost curve at the plant level.  Each of the three U-shaped curves represents the average total cost of a particular plant size.  Naturally, the firm would rather build the “blue” plant twice than build the “green” plant.

However, these curves assume the optimal use of capital and labor.  What if we restrict one of those and compensate with more of the other?  This is what Mando did in the clip “Mando and the Mechanic Talk About the Ship“

Each team will be given:

and the three-person teams will also get

The task is as follows:

Despite having more team members, the five-person teams will not generally be able to overcome the lack of super glue.

The most common example of firms using non-optimal combinations of inputs comes as a result of new technology. New technologies are often initially not trusted. Decades ago, hybrid corn took years for the majority of farmers to adopt it into their process. However, those early adopters had a distinct advantage. Similarly, there were people as late as the nineties that were reluctant to adopt computer systems. Those who did saw significant advantages in their ability to reduce costs per unit.